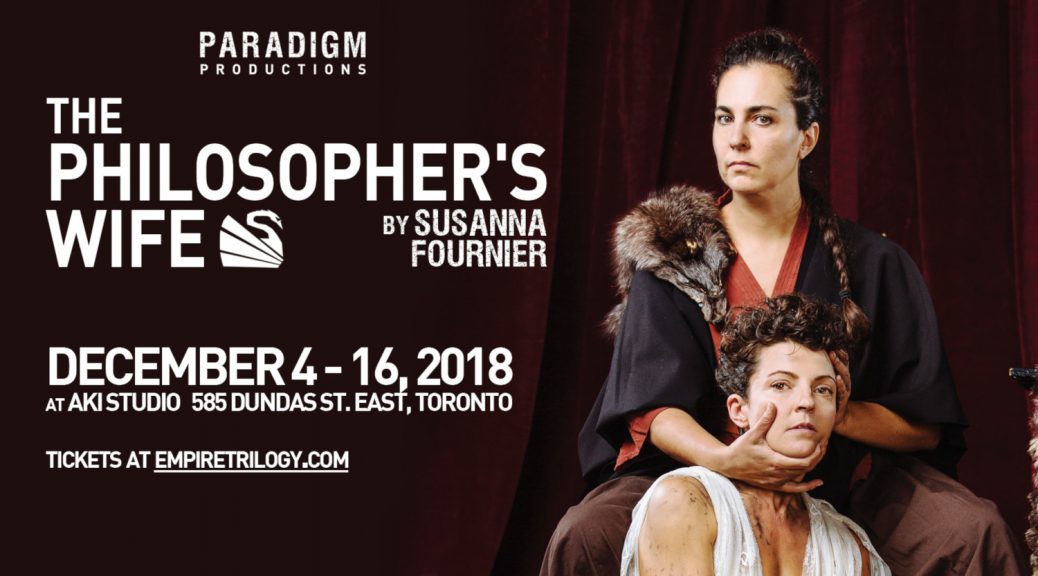 The first installment of THE EMPIRE TRILOGY

Deep in the North, a philosopher, exiled for promoting his atheist work amidst a bloody religious war, knows his theories can ignite a revolution. He wants nothing more than to return to the City, join the young Prince on the verge of inheriting political power, and usher in a new age of Reason. There’s only one thing holding him back; his personal life has collapsed into chaos.

In a desperate attempt to cure his wife’s inexplicable, animalistic behaviour, he hires a dog trainer. What begins as an experiment in canine obedience erupts into a power struggle between the sexes – unleashing violent reckonings from the animals within.

The first installment of The Empire Trilogy, The Philosopher’s Wife is a modern gothic rated Mature for opium eating, phantoms coming for your soul, dark humour, and subverting notions of education, sex, power, and submission.

This production is generously supported by The Storefront Theatre.

THE EMPIRE TRILOGY spans five hundred years of an imagined history (not unlike our own). Each play is its own story, but when combined they reveal a secret, overarching narrative. The second installment, The Scavenger’s Daughter, picks up the story of The Empire 20 years after The Philosopher’s Wife ends, which premieres at Buddies in Bad Times, from January 15 – 27, 2019. For tickets visit here.

HST and ticket fees are included.
Paradigm Productions HST # 82100 6111 RT0002.
Purchases made online or by telephone are by credit card only.
At the door payments accepted by cash, debit, VISA and Mastercard.
Box Office Telephone: 416-531-1402
Email: boxoffice[at]nativeearth.ca
More information on ticket pick-up here.

PARADIGM is a Toronto-based collaborative theatre company headed by artistic producer, Susanna Fournier. PARADIGM’s work is feminist, anti-imperial, queer, rowdy, and sometimes impossible. We create large-scale, design driven productions that crash mytho-poetic worlds into the here and now. We wnat to challenge you, entertain you, seduce, confound, delight, and wrestle with you. paradigmtheatre.com.