In addition to work they’ve done separately, Ramsay and Chau have a history designing together for Native Earth productions, including Annie Mae’s Movement, Salt Baby, Tombs of the Vanishing Indian.  And once again working as a team, re-imagining a familiar world was an intriguing undertaking.

“For this particular show, it had already toured and had a life,” says Chau. “There are already things that work, so I needed to expand on those ideas and inspire some new ones. It’s Huff 2.0.”

“Every script comes with its own unique set of challenges,” adds Ramsay. “However; it certainly helps when you feel that a script is well written, and telling an important story.”

And being familiar to audiences was not the only challenge; for Chau, so was the content. “It’s a really intense one-man show. It’s a type of script that can be hard to imagine put to life until you see it. It’s much, much funnier seeing it.”

Speaking of her process Ramsay explains, “My work is directly linked to the words, movement, and timing so the bulk of my process takes place in the rehearsal hall. My work toward concept necessarily has to begin with the play itself, and then everything else about the production gets layered in from there.”

At the helm of this re-imagining was director Karin Randoja, described by Chau as “super kind and collaborative.” Both designers spoke highly of their experience with Randoja. “I am always grateful when an open dialogue is possible with a director,” says Ramsay.

Cardinal’s Huff is a dark, biting story about Indigenous brothers coping with their mother’s death, which Chau expects audiences to walk away from with “the need to think and the need to talk.”

The re-imagined design is a key factor in how the audiences experience this story. “The director and designers are working toward some striking and cohesive visual storytelling, to support what is already a strong script,” says Ramsay.

Click here to listen to a podcast with Sound Designer Alex Williams. 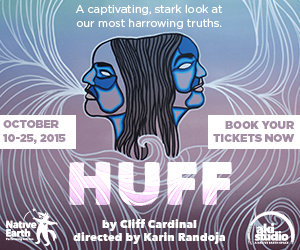 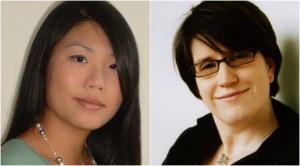 What was your first job in theatre?
JC: Designing for a few Fringe and Summerworks shows.
MR: Technician at Vanier Hall in Prince George, BC.

What advice would you give to someone
who wants to do what you do?
MR: Find designers whose aesthetic you like and don’t be afraid to contact them. Volunteer to shadow them. See as many shows you can. Work as a technician so you can understand the equipment, and what other people will need from you as a designer.

JC: Well, if you already went to school for say design, then:
Plant seeds. Get your portfolio together and just see theatre companies, and each one you see, ask for 3 more names. Hustle, don’t give up and enjoy the ride

What’s your dream travel destination?
JC: Spain; I get to go this spring!

What is your profession’s greatest challenge today?
MR: I know I am not alone in the design community when I say that periods of having to take on a lot of shows at once can make it very challenging to take care of yourself, and your regular life stuff.

What’s next for you?
JC: A kids show and being a mom.
MR: The Road to Paradise – Human Cargo/Crow’s Theatre
(at Buddies in Bad Times Theatre)