We are thrilled to announce that our presentation of Sheldon Elter’s Métis Mutt has been nominated for the 2016-2017 Dora Mavor Moore Award for Outstanding Touring Production.

Métis Mutt is a comedic, heartbreaking and unpredictable performance piece that recounts the journey of a young Métis man finding his way out of a destructive cycle.

This production has been funded by the Alberta Foundation for the Arts. Original production co-created with Kenneth Brown.

“a role that is physically demanding and technically flawless” – VUE Weekly 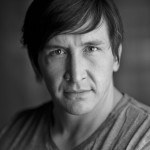 SHELDON ELTER
Sheldon is an award-winning Métis actor, writer, stand-up comic, musician and director originally from Northern Alberta. As a stand-up comic, he has emceed and been host at both Breaker’s, and Dave’s Comedy Saloon, and has toured Western Canada twice as the opening comedy act for hypnotist, Marc Savard. Sheldon was also a Top 14 Finalist on Canadian Idol in 2006. In 2002 Elter and his work Métis Mutt won two Sterling Awards for Best Actor and Best New Work. More About Sheldon