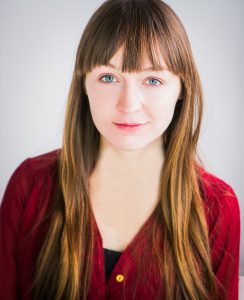 Jessica Bowmer is a theatre creator and actor, who was born and raised in Kitchener, ON. She is a graduate of Humber College’s Theatre Performance program and a recipient of the Mark Shoenberg Award, The Big Step Award and the School of Creative and Performing Arts Scholarship for Theatre Performance.

She has performed and collaborated on multiple pieces including Hamilton Fringe’s The Flesh of Her and Toronto Fringe’s How Did You Find Me Here? and F*cking Perfect (selected as Best of Fringe 2018). This past year she has completed her first directing credit for KW Youth Theatre’s The Giver, a devised adaptation. Other acting credits include inspiraTO’s The Marionette Makers and Adulthood Nightmares, Alumnae Theatre’s Queen Marie, Theatre TOnight’s Hypnagogia, or Ligretto Stop!, Second Strike Production’s Seven Ages and Humber Theatre’s To Ithaca and Life Underground.

Other than performing Jessica is currently taking film/tv classes and learning the ways of producing and direction.