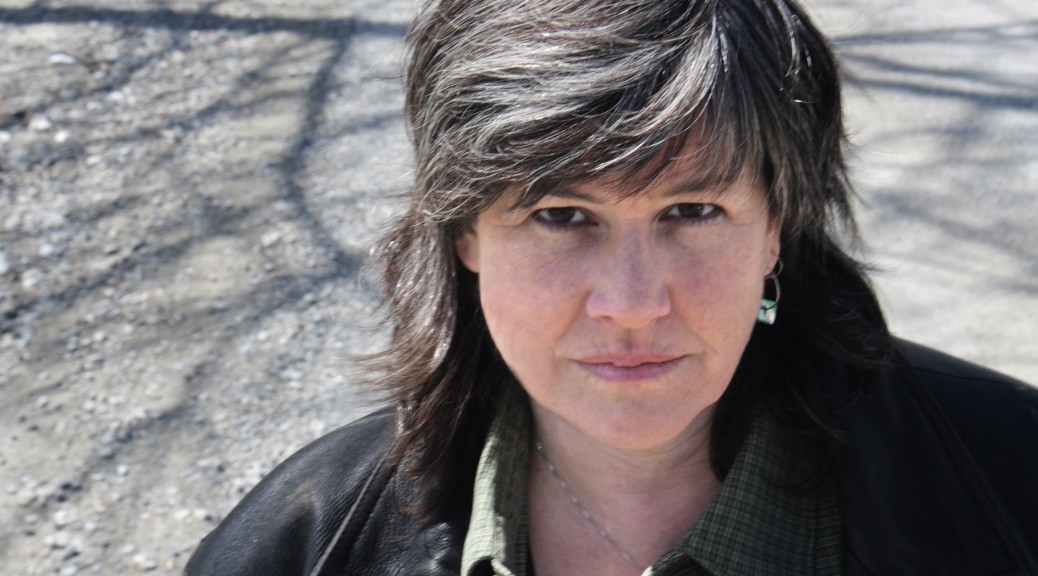 The first production in our 2014-2015 Season, sees Native Earth partnering up with Factory to bring audiences The Unplugging by Yvette Nolan. Over the next few weeks, we will introduce readers to key players in this production and partnership.

Today we begin with the person without whom there wouldn’t be a play: Algonquin playwright Yvette Nolan. Not only is Nolan an award-winning1 playwright, director, dramaturg3, and recognized community leader2, but she also led Native Earth Performing Arts as Artistic Director for eight years from 2003-2011.

Nolan was inspired to write The Unplugging after the passing of her mother. Feeling that she hadn’t learned enough from her mother, and inspired by an Athabascan legend, Nolan took only three months to pen the play about two aging Indigenous women4.

Making its Toronto debut at Factory’s mainspace March 14 – April 5, 2015, The Unplugging follows the women, exiled from their village and wandering a desolate landscape after all power has simply disappeared.  It’s not long in this new life before the women encounter a young man and need to make some crucial decisions.

“The play is funny and hopeful, even if a little apocalyptic.”

“I think the play addresses so many questions that the world is grappling with: women in the world, aging, our seemingly insatiable appetites, our dependence on technology, Indigenous knowledge,” says Nolan. “The play is funny and hopeful, even if a little apocalyptic.”

The partnership between Native Earth and Factory is just one of many reasons to be excited about this particular production. Led by Director and Factory Artistic Director Nina Lee Aquino, the production features a cast and design team Nolan stands behind.

“I have known Diana Belshaw since I lived in Winnipeg and she stayed with me, I have been awed by Allegra Fulton since Frida K., and it’s exciting to mix in a young up-and-comer like Umed [Amin]. Plus, Nina’s go-to team – Michelle Ramsay, Camie Koo, Romeo Candido, Clare Preuss – breathtaking.”

Nolan is Past President of the Indigenous Performing Arts Alliance, currently serves on the board of the Saskatchewan Arts Alliance and Word On The Street Saskatoon Chapter, and her book Medicine Shows, about Native theatre in Canada, will be published in the spring. Next for Nolan is the Banff Playwrights Colony to work with Michael Greyeyes on his theatre-dance piece Nôhkom, then Saskatoon for Short Cuts, a festival of 10-mintues plays. Following which she’ll direct Falen Johnson’s Two Indians. Finally she is co-curating The Study on Manitoulin Island with Sarah Garton Stanley for the National Arts Centre. 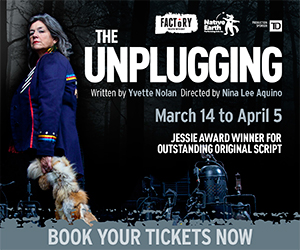 Getting Unplugged with Yvette

What advice would you give to someone
who wants to do what you do?
I guess the bigger question is what do I do? I cobble together a life in the theatre. For me, my success has largely been dependent on doing things for the right reasons, which for me is not money. Whenever I do things for the wrong reasons, the universe smacks me upside the head so fast. So, the advice: figure out your reasons, your values, and make decisions accordingly.

What’s the best advice you’ve ever received?
“theatre is hard, Yvette, be generous” – dd kugler
Also, Warren Zevon told David Letterman, not me, “enjoy every sandwich” but I was listening and I took it personally.

What inspires you?
People working to make change inspires me, whether it is huge like Arab Spring or Idle No More, or small and personal like a woman leaving an abusive relationship, a whistleblower
like the student at Dalhousie, or Lucy DeCouture.

What was your first job in theatre?
Eeeeeh, first? I have done everything.
Hung lights during university to support myself. Lay dance floor. Built props. Stage managed. Built sound tapes, on reel-to-reel, no less. Don’t remember what came first.

What ability would you like to steal from another artist?
Oh my, I would love to sing like Michelle St John.

Where is your favorite place to be?
The Yukon. My heart home.

Who is one of your heroes?
My mom, the late Helen Thundercloud, who survived tuberculosis (twice), residential school (two), divorce, a fire, to become a young elder who moved so many of us to try to know.

The one word your best friend would use to describe you?
She says, “Irreducible”. Then she admits she is cheating.

What’s your favourite dessert?
Cheese. A hard one, a soft one and a blue one.

If you were a breakfast cereal which would you be?
I am SO steel-cut oats.

How would you title your memoir?
Because my first professional gig onstage was playing the dead body in Joe Orton’s Loot, I thought I would title it Playing Dead, but after 30 years in the biz, I think perhaps I will call it If You Want Me I’ll Be In The Bar (a nod to Joni Mitchell’s A Case of You).

3
Plays by Yvette Nolan include BLADE, Job’s Wife, Annie Mae’s Movement, Scattering Jake, Ham and the Ram, The Unplugging, The Birds (a modern adaptation of Aristophanes’ comedy), the text for from thine eyes (Signal Theatre), Prophecy (Canada 300/Watermark) and Alaska, which was part of the hugely successful inaugural Short Cuts, produced by her company Hardly Art with On The Boards in Saskatoon.