A staple element of Native Earth’s annual Weesageechak Begins to Dance 27 is to introduce audiences to the playwrights participating in Native Earth’s Animikiig Training Program. Another of the four of these emerging playwrights is Métis artist Jessica Lea Fleming, from Penetanguishene, of Wendat and French descent. 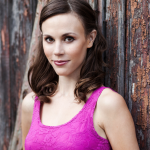 Jessica Lea Fleming is an actor, writer, producer, arts manager and improviser based in Toronto. She studied Drama at the University of Guelph, completed the Second City Conservatory Program in 2013, and currently works as the Development Manager for the imagineNATIVE Film + Media Arts Festival.

This marks the first time Fleming will be participating in the Weesageechak Begins to Dance festival, and she is proud to be a part of it. “Weesageechak represents everything wonderful about Indigenous theatre: mentorship, community and an insatiable appetite for inspiration.”

She will be sharing her fifth play, Without Icing, the story of an estranged father and daughter who reunite after living difficult lives. “I’ve been thinking about this play for years now, but finally had the guts to start writing it about a year ago,” says Fleming. “It’s about the power of forgiveness.”

“There is something really special and exciting about getting the chance to access a partially completed world.”

About bringing her work to the Weesageechak audiences, Fleming says, “There is something really special and exciting about getting the chance to access a partially completed world. The audience gets to play such a significant role. Unlike in final productions, reactions, feedback and questions shape everything!”

A Board Member at The Theatre Centre and a contributor at Urban Native Magazine, she would like you to tweet pictures of animals to her: @JessFlamingo

Some bits and bobs about Jessica Lea Fleming

What are you looking forward to this Weesageechak?
Mingling with all the beautiful people of course!

What advice would you give to someone who wants to do what you do? Work with people you respect and be kind and disciplined.

What was your first job in theatre?
A nightmare

What is your profession’s greatest challenge today?
Taking risks in a society that values money more than art.

What are you thinking right before you begin a play?
Listen

The one word your best friend would use to describe you?
I texted both of them to find out just for you! One said “giving” the other said “enthusiastic, engaged, open-minded and MAD HOT”.
I really thought they were going to say bossy.

Who would you most like to have dinner with?
My sweet hunk of a man.

You can catch Jessica Lea Fleming’s Without Icing on
Wednesday, Nov 19th @ 7:30pm.
More About Tickets