Native Earth’s annual Weesageechak Begins to Dance 27 is a place where artists from all stages of their career bring their new work to be heard, often for the first time. Returning to the festival are Dora-nominated co-founders of An Indie(n) Rights Reserve, Spy Dénommé-Welch and Catherine Magowan.

Multi-disciplinary artist Spy Dénommé-Welch (Algonquin), and bassoonist and composer Catherine Magowan co-created the Dora-nominated opera, Giiwedin, which debuted in a co-production with Native Earth in 2010. The pair return to Weesageechak, which they describe as “THE place to see new, upcoming, and established Indigenous theatre creators and performers. You really don’t know what you’re going to get, especially if we’re involved.”

Dénommé-Welch and Magowan will share their new piece, Victorian Secrets, a new sexy cabaret for actors and honky-tonk piano that draws on the aesthetics of silent film, musical theatre, parody and satire. “Weesageechak doesn’t seem to blink at our projects, which can be kinda off-the-wall.”

“The piece started with Spy’s idea to purchase old photos at a shop in Kensington, which would serve as the inspiration for vignettes that explore constructs of sexuality and repression by juxtaposing Victorian and contemporary language and technologies,” Magowan explains.

Magowan has been principal bassoonist with the Sudbury Symphony Orchestra since 2002 and regularly performs across Ontario. Her electric bassoon band, Das Fagott Mannschaft (“the bassoon team” in German) has been making a splash in and around Toronto. Other work for Magowan and Dénommé-Welch includes the composition of shorter works for chamber ensemble, including Deux Poèmes Sur La Formation Des Glaces and Bike Rage, which won the 2013 Baroque Idol composer competition.

“Weesageechak doesn’t seem to blink at our projects, which can be kinda off-the-wall.”

Together, in addition to creating cabarets and operas, Dénommé-Welch and Magowan are two halves of the comedy duo Professor Quack & Grunt, delivering scintillating lectures at poetry festivals and book launches. And next up for the pair is a premiere with the Scarborough Philharmonic Orchestra on January 17, 2015, and a second full-length epic opera they are creating with the support of Ontario Arts Council, Toronto Arts Council, and various musical commissions.

Some bits and bobs about
Spy Dénommé-Welch & Catherine Magowan 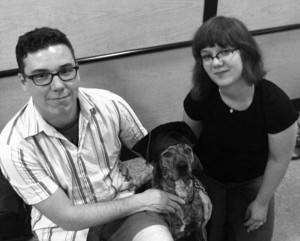 What advice would you give to someone
who wants to do what you do?
CM: Marry rich.
SDW: Yeah.
CM: Too bad neither of us fit into that category…
SDW: Yeah…I guess I’ll keep buying lotto tickets?

What’s your favourite dessert?
SDW: Mine is pumpkin pie, with lots of whipped cream on top.
CM: Key lime pie, or any similarly citrus-with-whipped-cream-on-top creation. It’s a theme for us.

What’s your favorite line from a song?
SDW/CM: Blame Canada.

What are you reading right now?
SDW: I just finished [Andrew Rae’s]
Moonhead and the Music Machine
CM: I’ve been stuck on the last Game of Thrones
[by George R.R. Martin] for the past year…

Who would you most like to have dinner with?
SDW/CM: The Trailer Park Boys.
Not the actors, the characters. All of them.

You can catch Victorian Secrets on Tuesday, Nov 18th @ 7:30pm.
More About Tickets