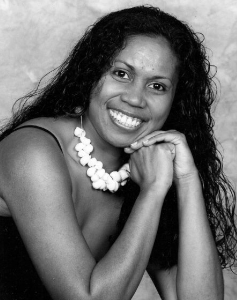 Taryn is of Torres Strait Island descent on her mother’s side (Moa & Darnley Islands) and Aboriginal descent from her father’s family (Wuthathi Tribe). Taryn graduated from NAISDA Dance College and has since performed and taught
extensively, including performing with the acclaimed Bangarra Dance Company at the 1996 Olympic Games Closing Ceremony in Atlanta, USA.

Taryn started a family dance group called InDidgDance performing cultural dances and teaching in schools both nationally and internationally to New York, New Zealand, Europe, & Korea. She also performs with Descendance Aboriginal and Torres Strait Island Dance Company and has toured to China, Japan, Taiwan, Qatar & Russia. Taryn is also a Zumba instructor and is currently studying a Bachelor of Education. Her passion is to share and educate others on her Indigenous cultures through song, dance and performance.