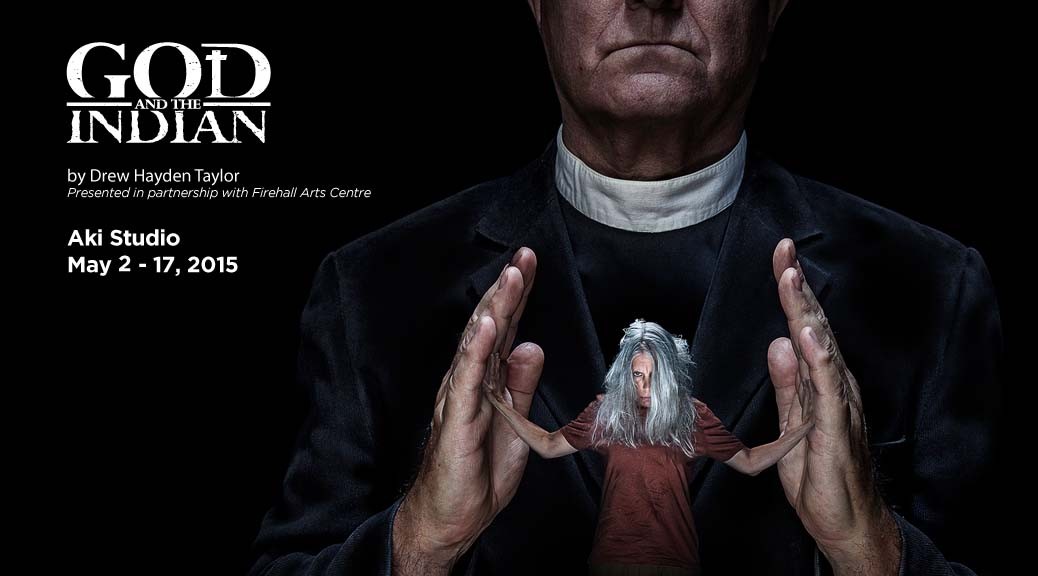 While panhandling outside a coffee shop, Johnny, a Cree woman, is shocked to recognize a face from her childhood spent in a residential school. Desperate to hear him acknowledge the terrible abuse inflicted on her and other children at the school, Johnny follows Anglican bishop George King to his office and confronts him.

“I guess it helps when you are the same race as God.” – Johnny

Tuesday-Saturday at 8pm; Sunday at 2pm.
Pay-What-You Can (PWYC) available for Tuesday performances.
Purchases made online or by telephone are by credit card only.
At the door payments accepted by cash, debit, VISA and Mastercard.

“[An] emotional, engaging 90-minute battle of wits… Both Ravensbergen and Hauff give strong performances, taking the volleys of accusations and denials to heart-rending extremes.”
NNNN – NOW Magazine

“While Johnny, played with heart and spirit by Lisa C Ravensbergen, is the manic, twisted, charming scene-stealer of the show, King, played by Thomas Hauff has a subtle complexity that makes him more than just a stereotypical predator.” – Mooney on Theatre

“This play is not only educational in its premise, but also moving with its dialogue and performances.” – theXTRAmile

“Sometimes humour is an entry point into conflict that eases people into that world and then surprises them with the things they are able to confront.” – Lisa C. Ravensbergen talks to NOW Magazine

“What surprised me the most was that I could still find some humour in the story, albeit dark humour. But to me, that most exemplifies the Native community, humour and tragedy walking side-by-side.”
– Drew Hayden Taylor talks to She Does the City

Drew Hayden Taylor is an award-winning playwright, novelist, scriptwriter and journalist from the Curve Lake First Nation. Some of Drew’s 26 books have been translated into Spanish, Slovenian, Italian and German. His plays have seen over 80 productions. His future projects include a book of Native science fiction short stories, a screenplay based on his highly successful comedy play The Berlin Blues, and the publication of Me Artsy, the continuation in his exploration of various aspects of Native culture that began with Me Funny and Me Sexy. And finding the time to do the laundry.